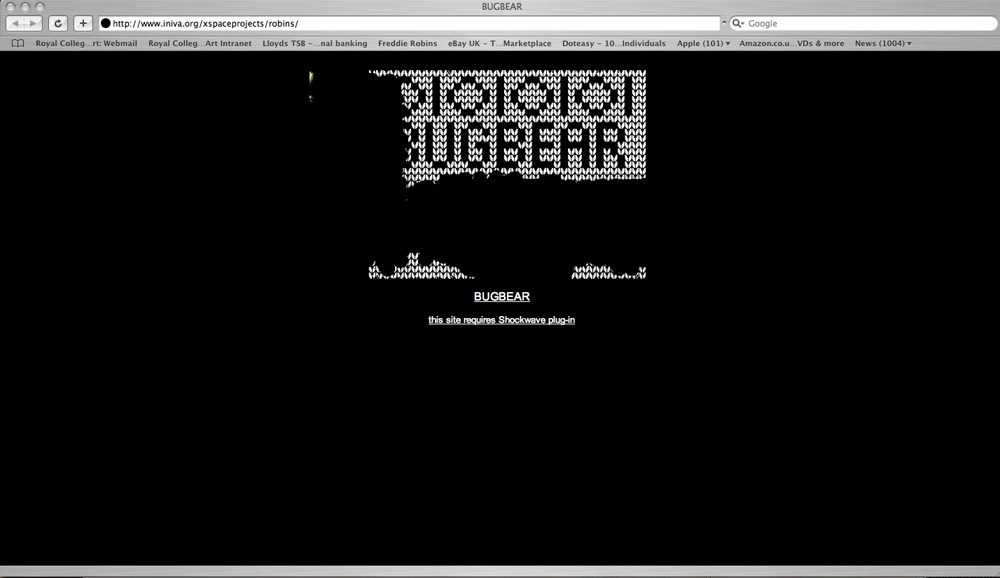 I have only recently become involved with new technology and am very excited by its artistic potential. I have started to familiarise myself with the debates around new technology and with computers in general. I have basic computer skills and am in the process of teaching myself how to use “Adobe Photoshop”. I would like to research into knitting and the internet as a way to explore and communicate my fascination with the process of knitting and knitted structures. There are many similarities between knitting and the internet. They are both physically solitary processes. Both are making sense of, translating and communicating information. Computer programs consist of long sequences of instructions that individually are very simple, so does knitting. Both can produce extremely complicated results. Computers and knitting patterns use grids, with coloured squares to relay visual information. With both mediums it is easy to “undo” or “unravel” your work. However knitting is an “everyday skill” of the past with social and cultural associations whereas computers and the internet are an “everyday skill” of the future which cross social, cultural and geographical boundaries. I would like to culminate my research in a web site which is controlled by the user and results in the production of a knitted structure – virtual knitting.
(Statement taken from application to inIVA for X-Space commission, 1999) 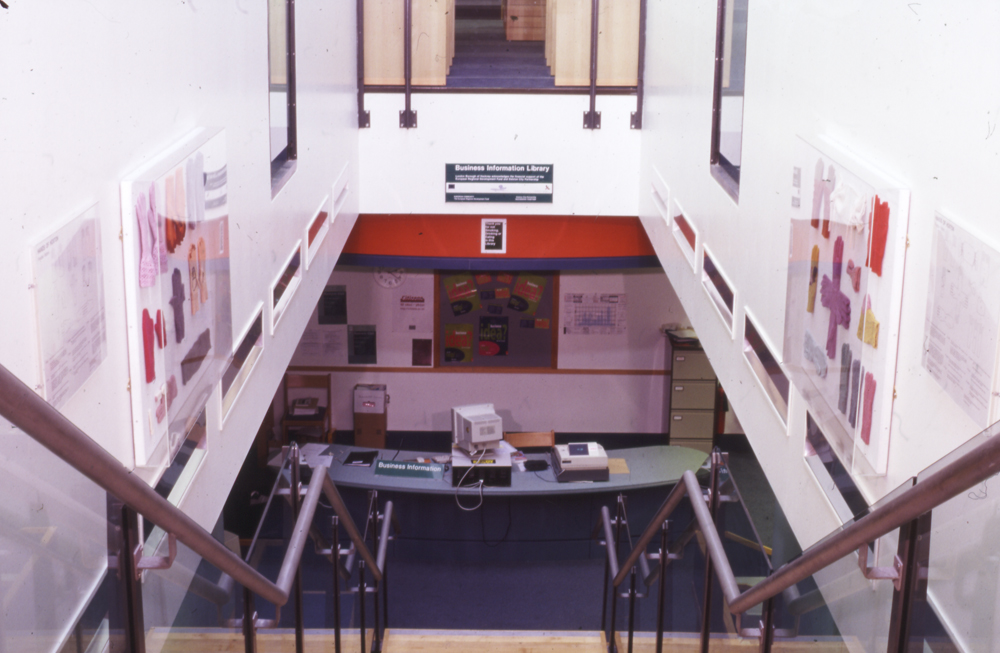 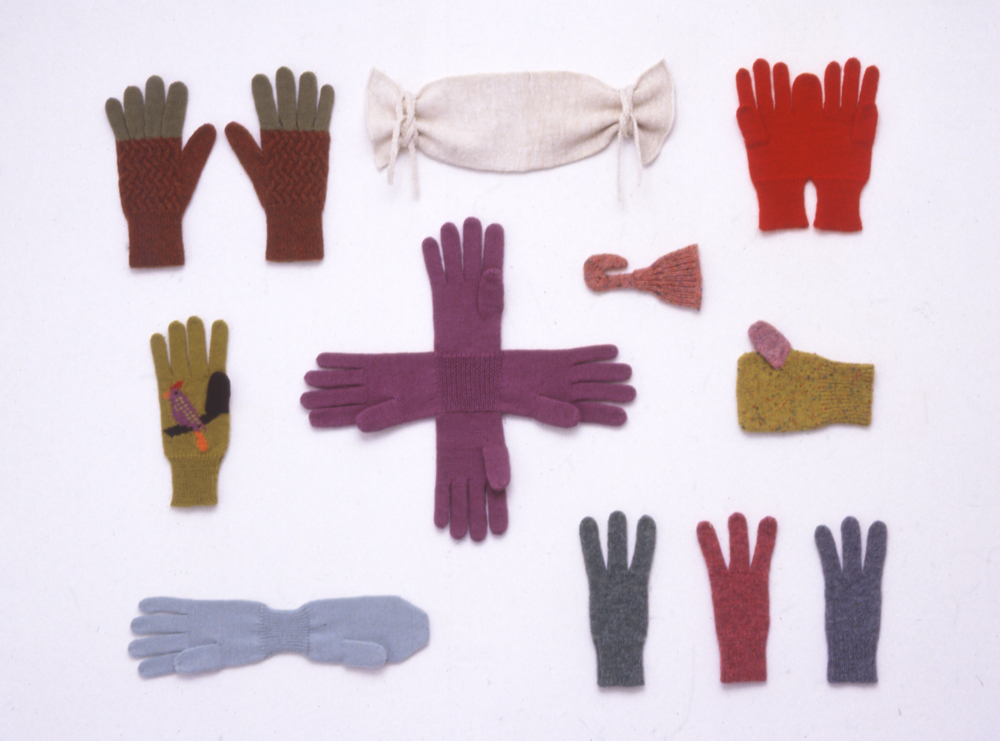 The knitted gloves that form the basis of this public art commission relate to a piece of local history and to a function of the library. Each glove is named after a local character, either historical or contemporary. For example: Guy is a pair of gloves with badly burnt fingers. The letter warning of the Gunpowder Plot was received in Hoxton in 1605 and Guy Fawkes was duly arrested in the cellars of the Houses of Parliament. Shoreditch Library can give you information on the government and basic legal advice.

Within this piece gloves are used to represent the hand, a universal symbol that cuts across age, race, sex, class and culture. The hand is also a symbol for much of what goes on within a library; finding the books, turning the pages, writing or using the computer keyboards. Woolly gloves are an ordinary items, worn for generations by ordinary people. Here the library and the knitted glove get given extraordinary treatment.

Freddie Robins’ first public art commission consists of two large wall mounted acrylic cases containing 17 “pairs” of knitted gloves. Explanatory panels, mimicking those used in museums, are hung next to each case. These contain the infomation that links each glove to the library and to the local area. The piece is hung either side of the main staircase down to the basement level of the library.
(Statement taken from Hands of Hoxton Press Release, April 1999)

Stories behind gloves
(Top row, right to left)
Thomas All library members have access to the library’s business library. During the 17th century Hoxton was renowned for its’ “green fingers”. Thomas Fairchild was the greatest of the Hoxton market and nursery gardeners. He was a prosperous businessman and had he been alive today he could further his success through use of the business library.

James  This library holds local and national information on health. By the 19th century Hoxton had became home to a number of private lunatic asylums. James Parkinson was a local doctor who lived at 1 Hoxton Square. He initiated many improvements and pressed for the humane treatment of the patients treated within these asylums. The illness known as Parkinson’s Disease is named after him. He identified this disease in an essay in 1817.

Kate  This library has a children’s library which includes books for the under fives. It also has a textbook and home work collection to help children with their schoolwork.  Kate Greenaway (1846 – 1901), the famous writer and illustrator of children’s books, was born at 1 Cavendish Street in Hoxton.

(Middle row, right to left)
Henry This library has local and national newspapers and holds information about what’s on.  In the 19th century Shoreditch had its own specialist Sunday morning bird market in Sclater Street. Henry Busby Bird was a notable local politician in the early 20th century. “A bird in the hand is worth two in the bush”.

Lakshmi This library stocks information on the world faiths and can supply information about local places of worship.  Lakshmi is the Hindu goddess of wealth and good fortune.

Peter This library holds story telling sessions for children.  Captain James Hook is Peter Pan’s adversary in J M Barrie’s classic children’s story “Peter Pan”.
Caroline This library is free to join and there is no charge for borrowing books. Thumbs up, the hand sign for “good”.

(Bottom row, right to left)
David  This library works “hand in glove” with other libraries to give you access to books and information held there.  David is the Head Librarian at Shoreditch Library (1999).

Andrew  This library provides access to the internet and the World Wide Web (WWW) for all its’ members.  These gloves represent the single-hand alphabet sign for “WWW” (World Wide Web).

All gloves were machine knitted by Freddie Robins except for Thomas which were hand knitted by Jean Arkell. 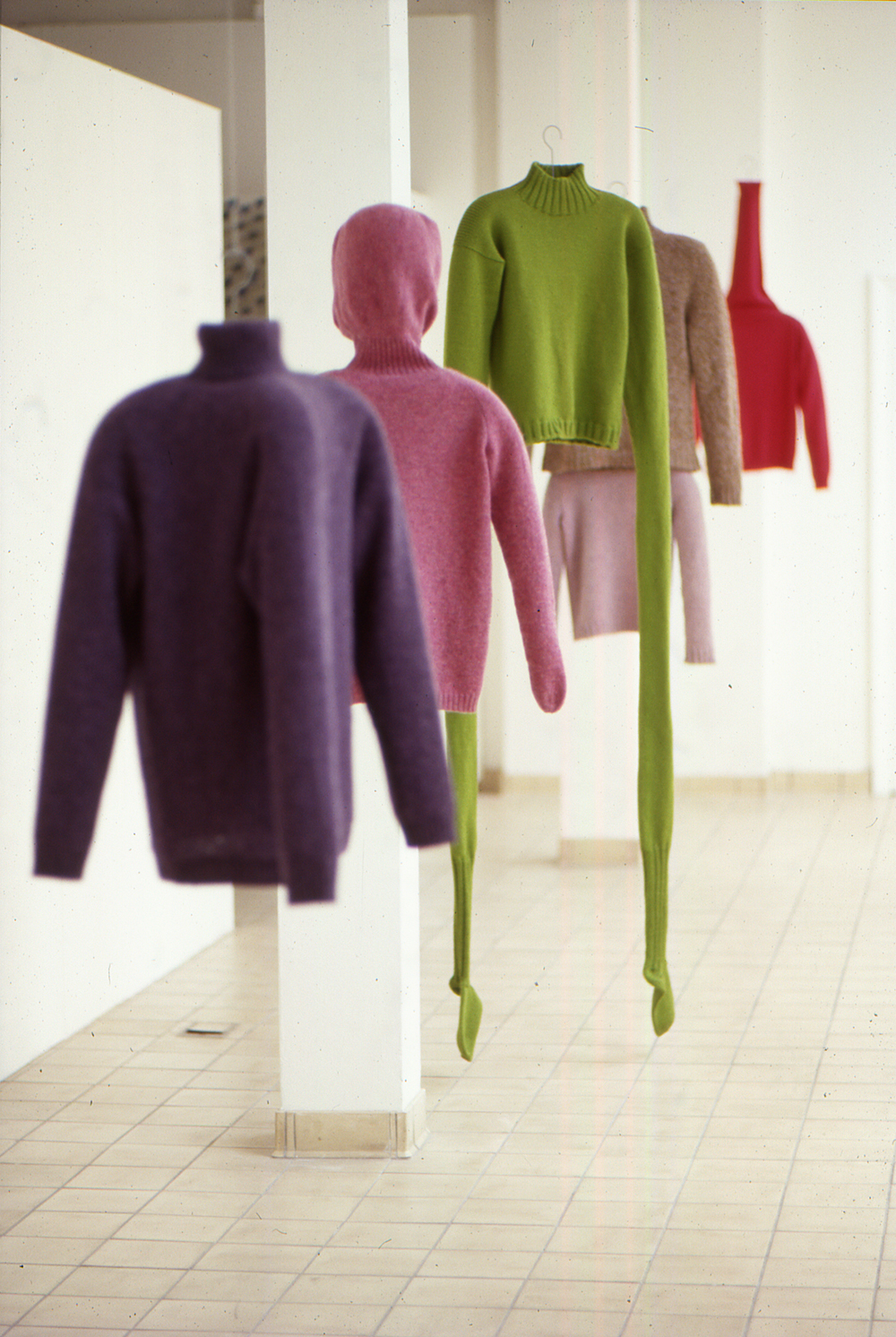 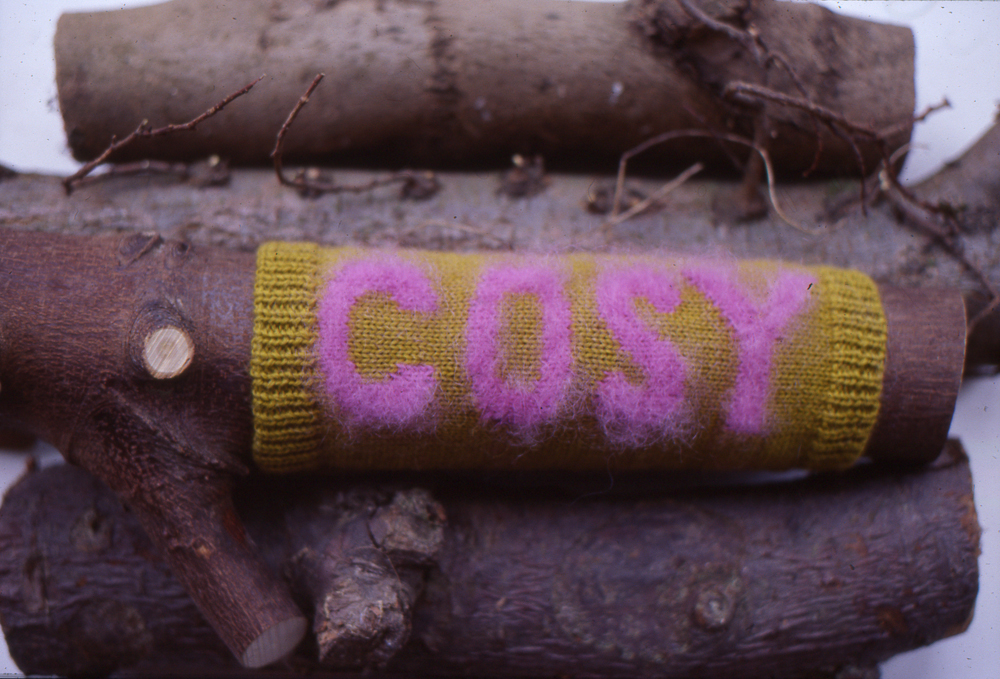 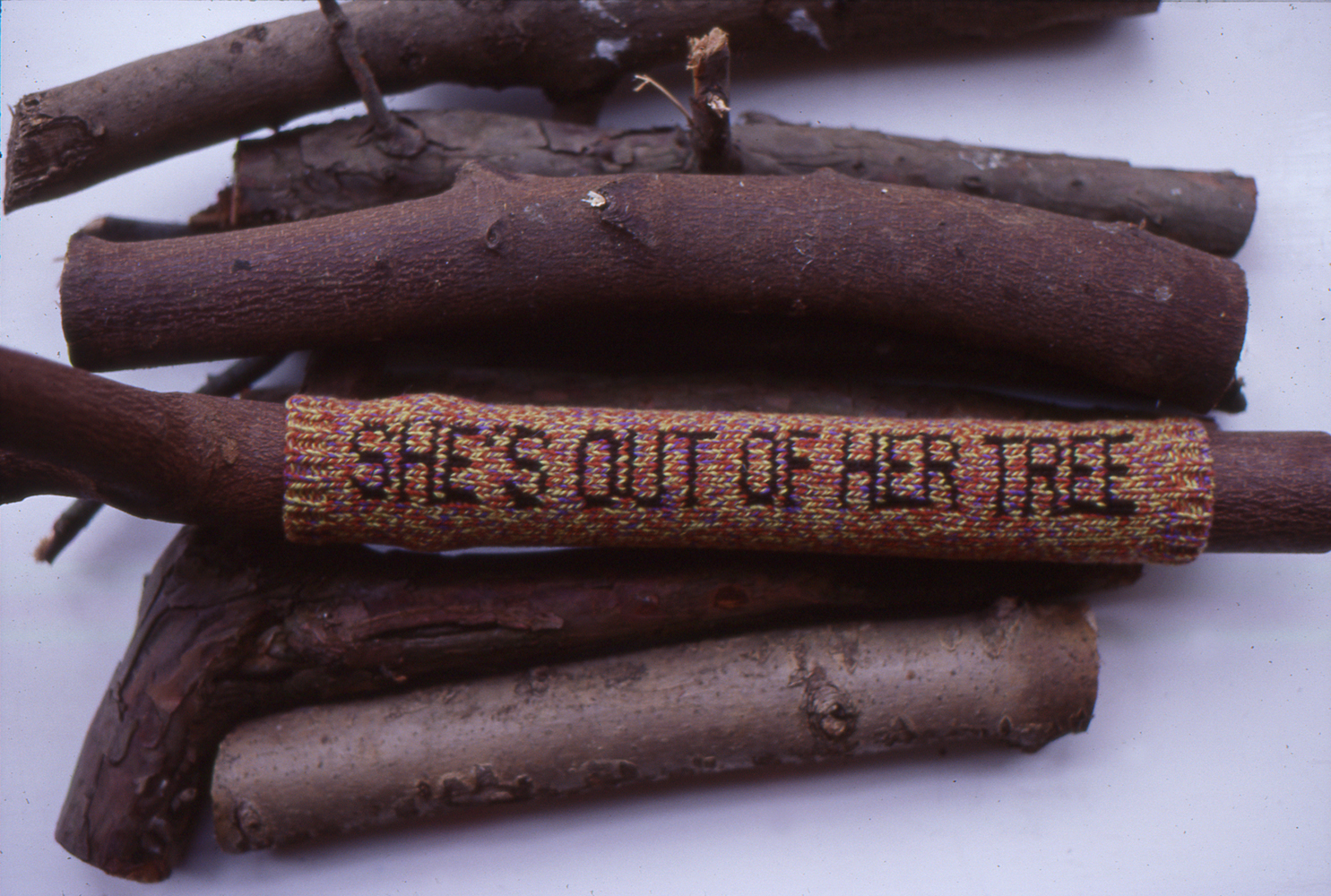 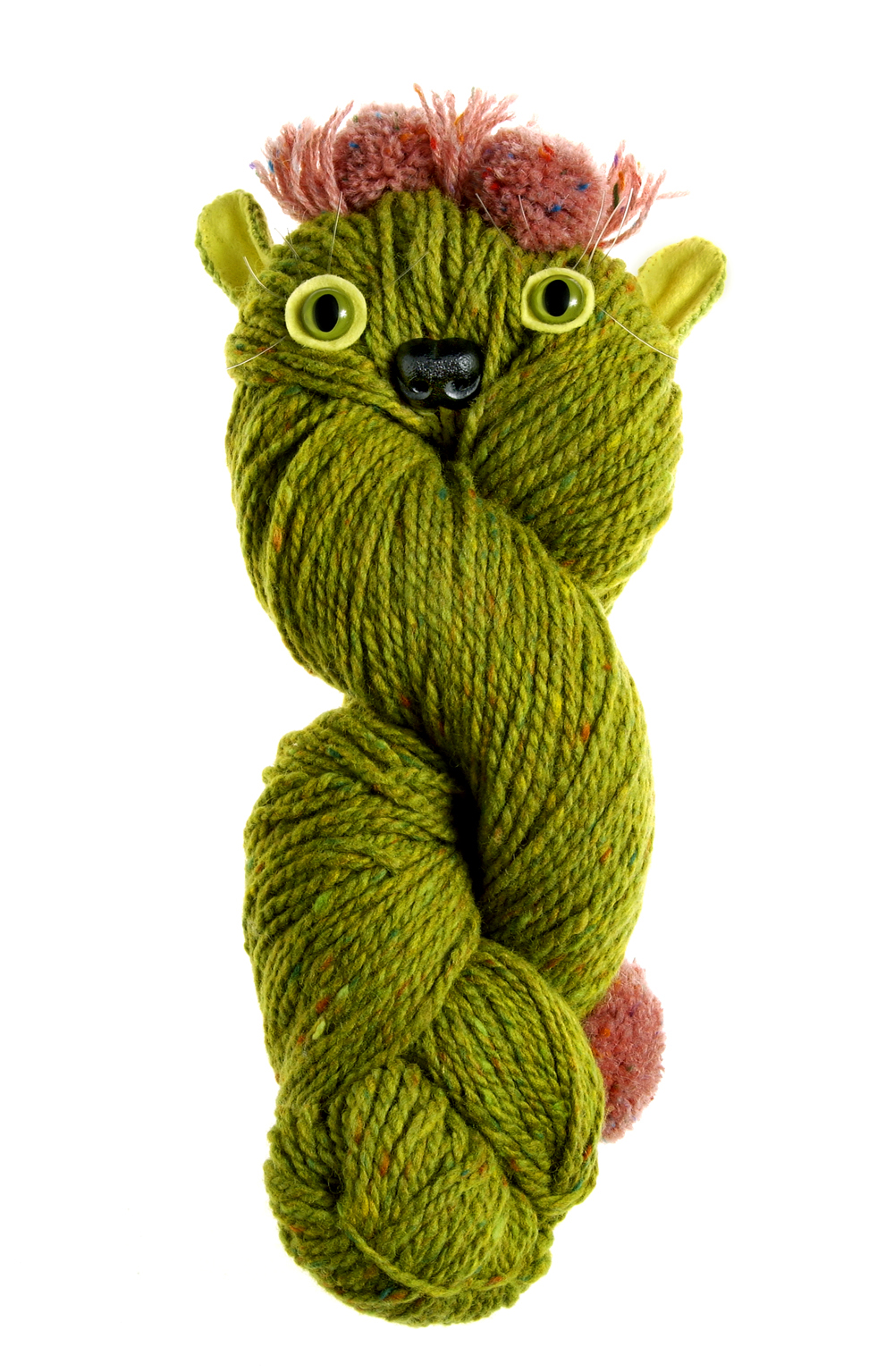 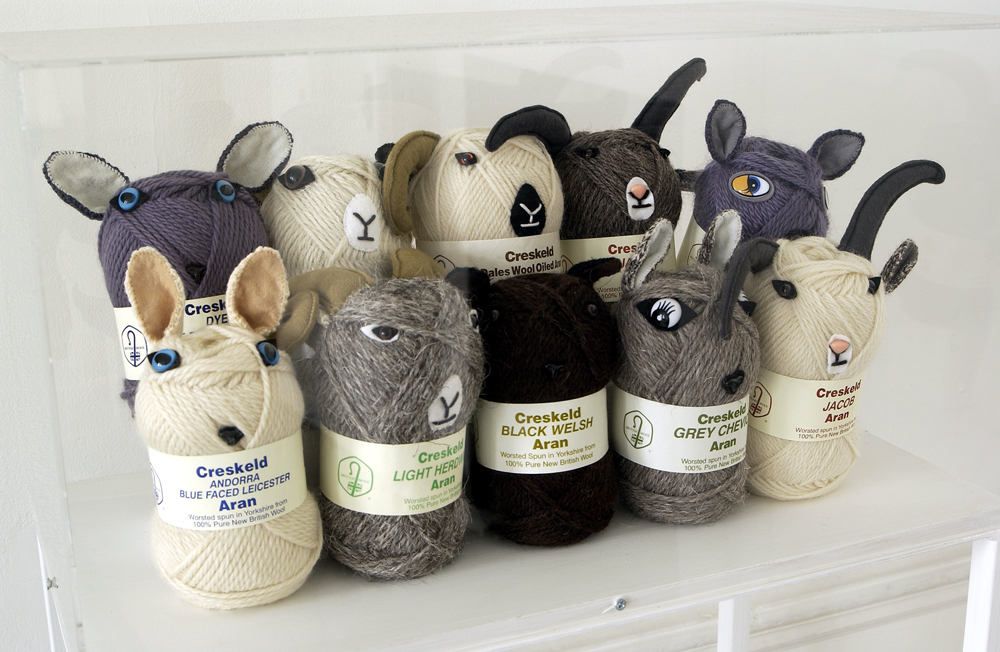 My awareness of textiles came through Janie, a rag doll made for me by my Aunt. Janie’s orange wool hair was a great comfort to me, I would tickle my nose with it. Her hair would gradually wear out and my Godmother would give her a new lot, always wool, always orange.

My Godmother became my greatest inspiration. She was always making things, not frumpy, lumpy things that you hid in your wardrobe, but fashionable, desirable toys and clothes. She was a free spirit. She lived alone, was unmarried and just got on with her own thing. I associated textiles with her and therefore with freedom.

I loved the Clangers, they were knitted. My Godmother taught me to knit, it was difficult, she was left handed. I loved knitting.

I was further inspired by the knitwear designer, Patricia Roberts. She did not rely upon traditional textile images, wholesome flowers, but turned instead to the contemporary urban world for inspiration. She was bold. I entered knitwear design competition in a craft magazine. I won. I was academic but I was also creative. I knew which path I would follow, the one that represented individuality. 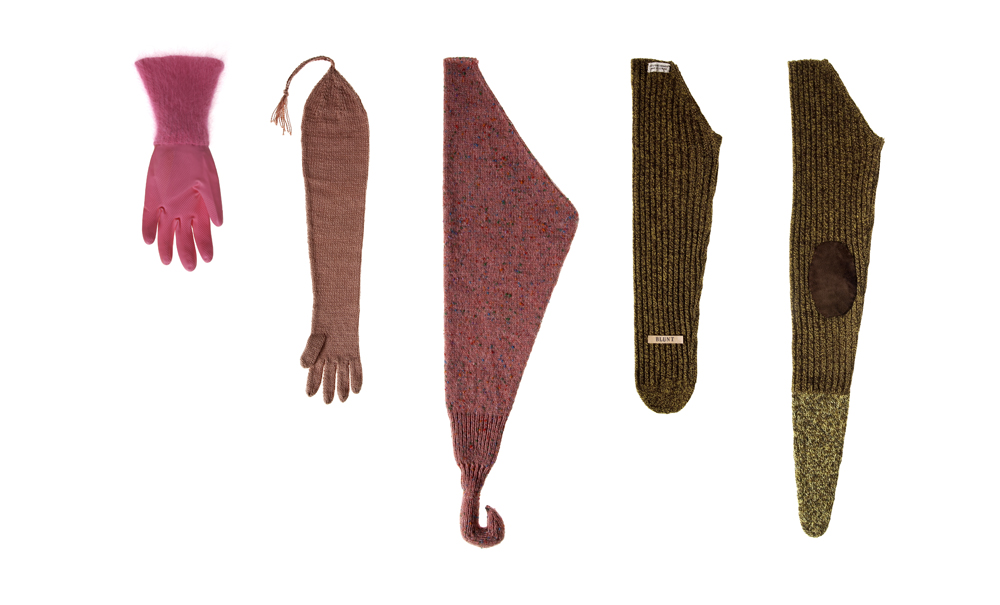 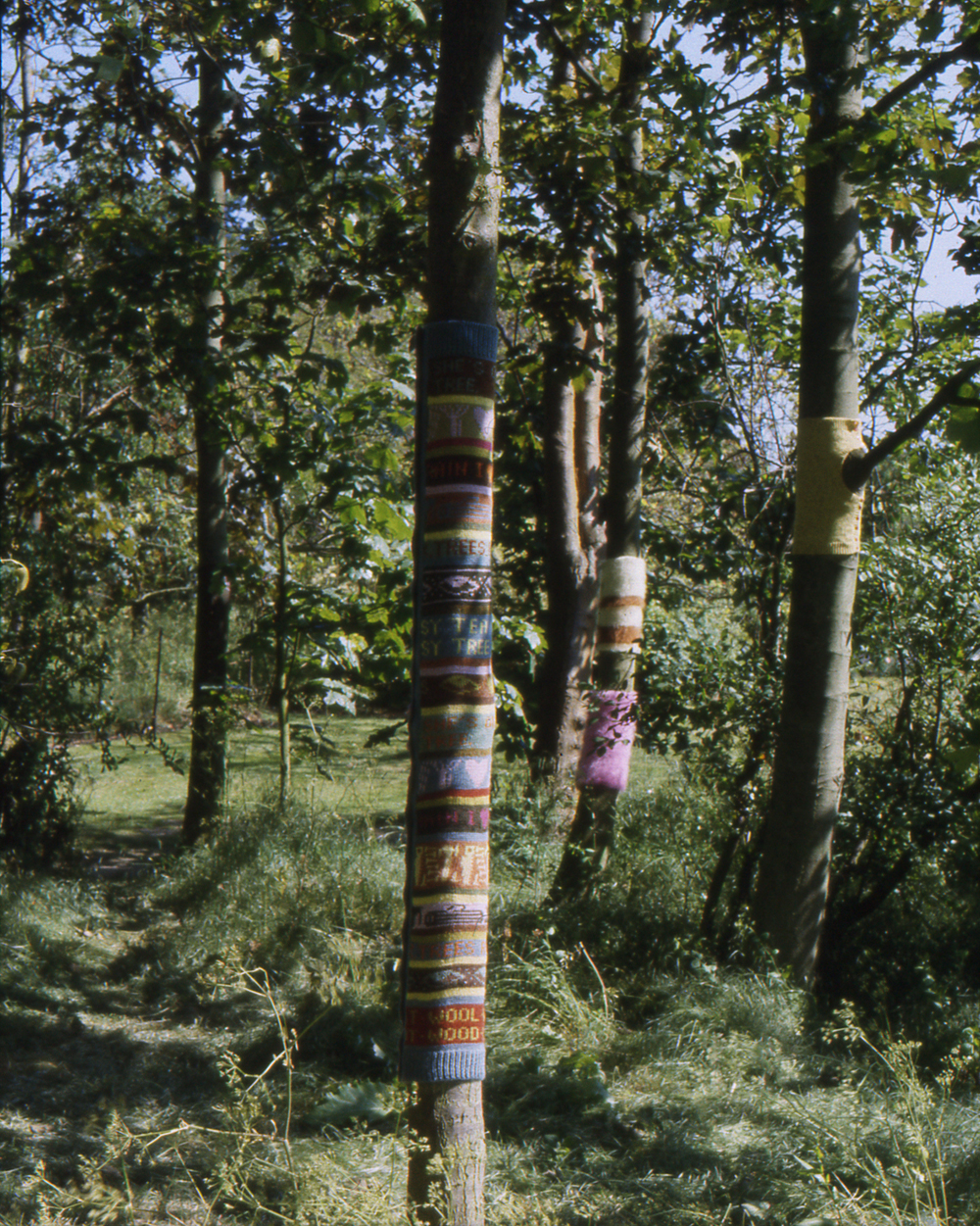 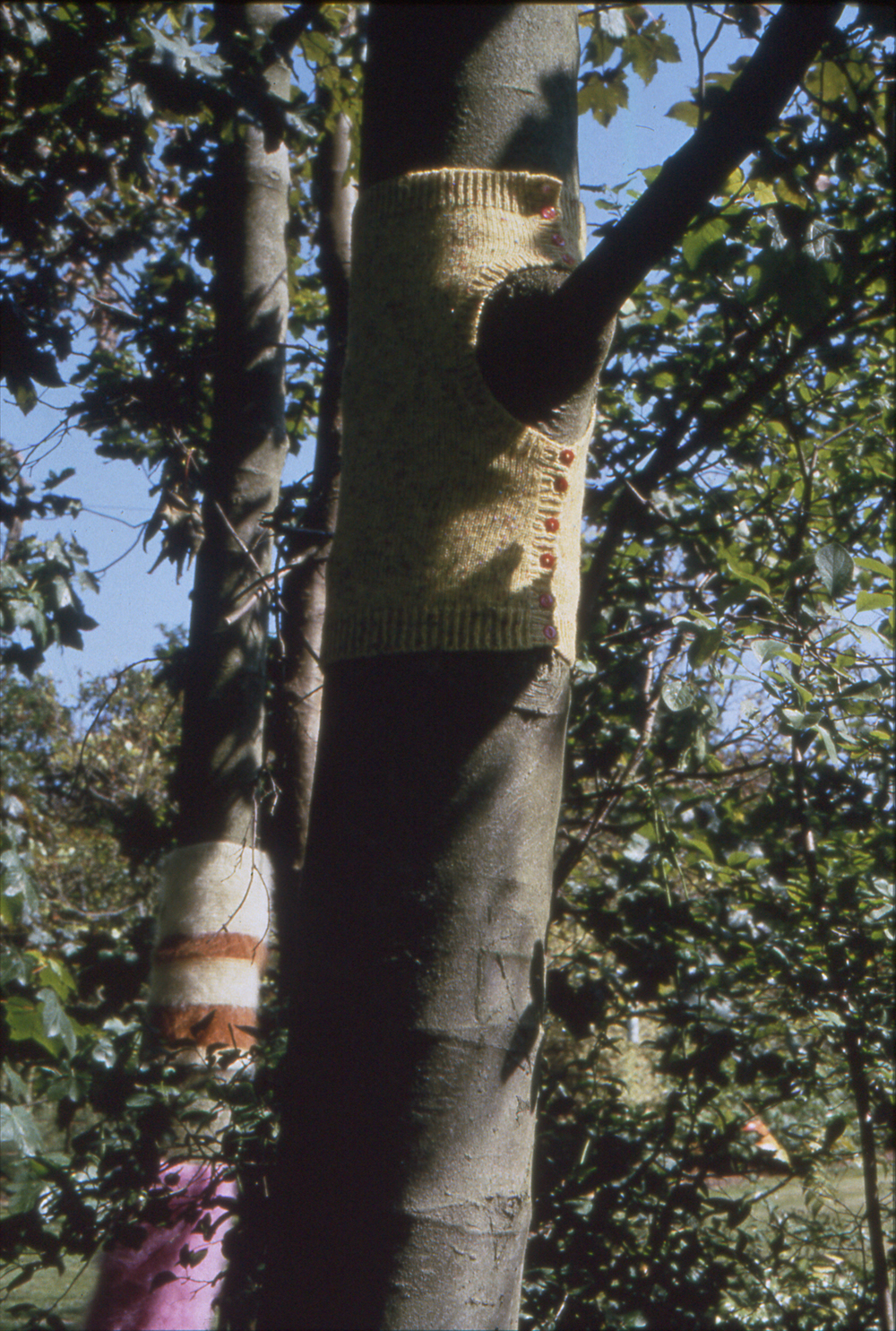 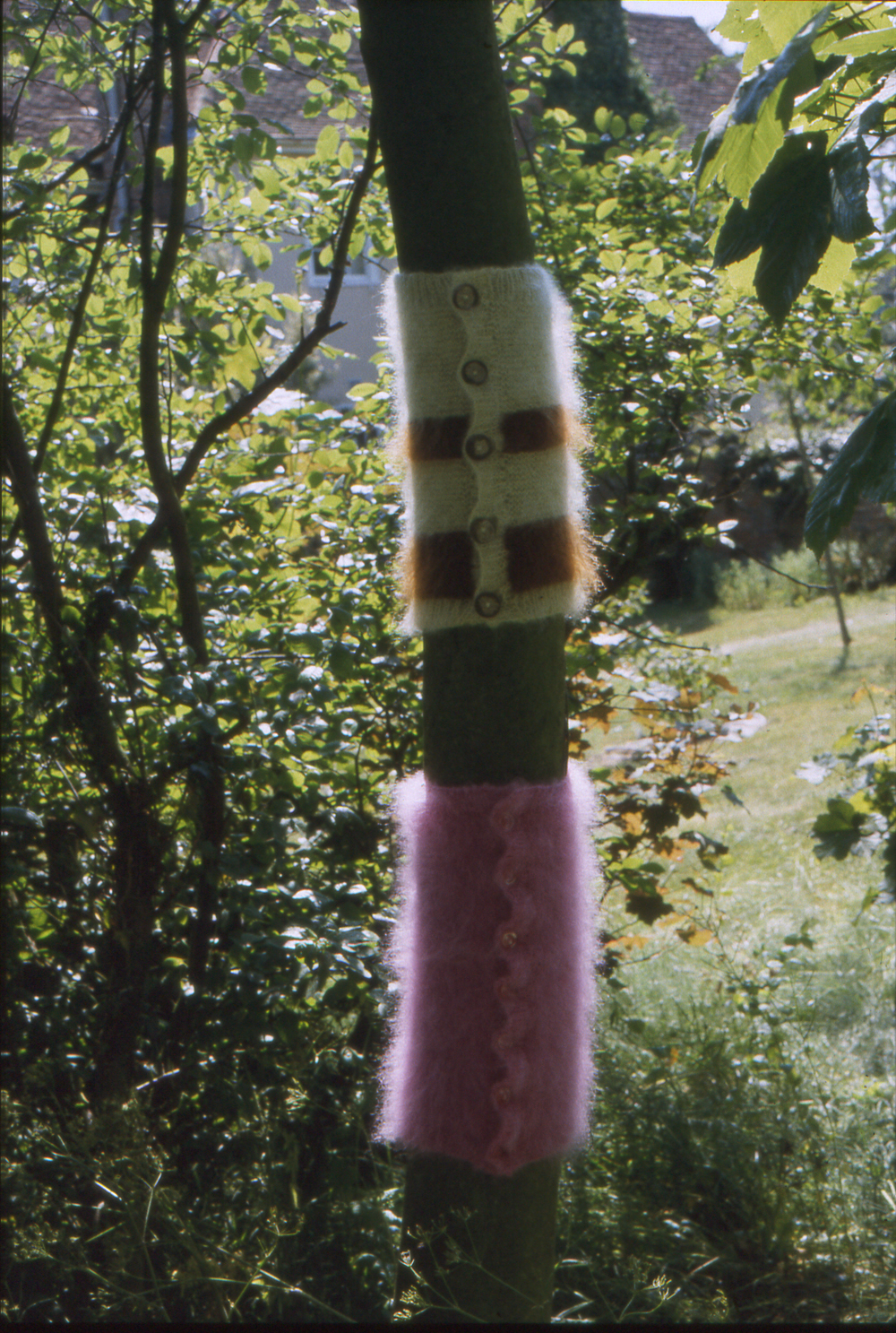 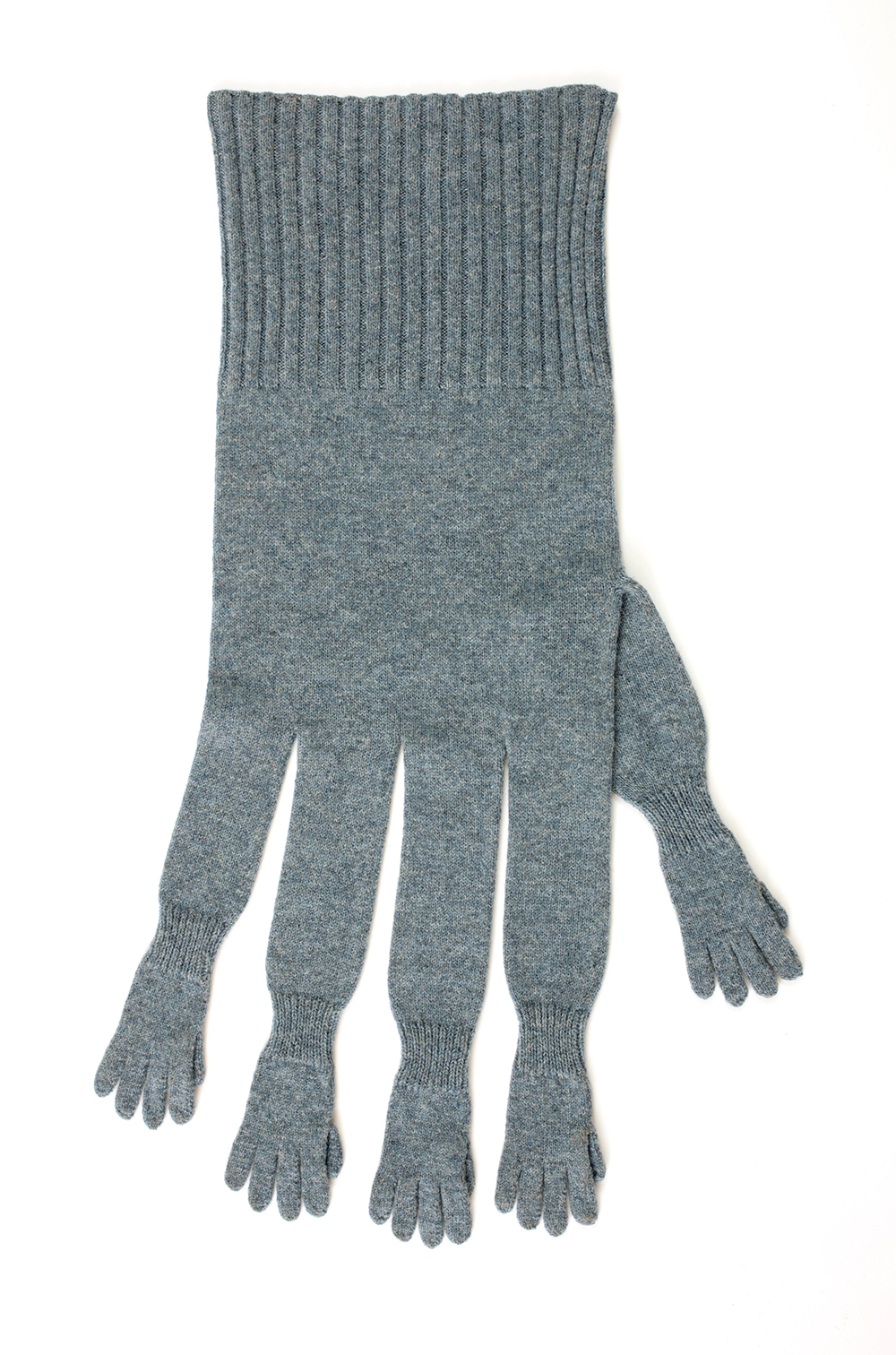 Hand of Good, Hand of God is one of my earliest pieces. It followed on from my series of Odd Gloves. It plays with mathematics and pattern writing. The large glove being a multiplication of the number of stitches and rows in a regular knitted glove, the smaller being a division. The large glove is 3 1/2 larger than a regular glove, the smaller is 1/4 smaller. I have made this piece as large as I could without having to seam pieces together. My aim is to make a much bigger piece (possibly to be called A Bigger and Better God) with more “layers” of gloves. This could either be done by seaming pieces together or by the use of large, industrial machinery, which I have begun to use in the production of my large-scale work, Anyway 2002. 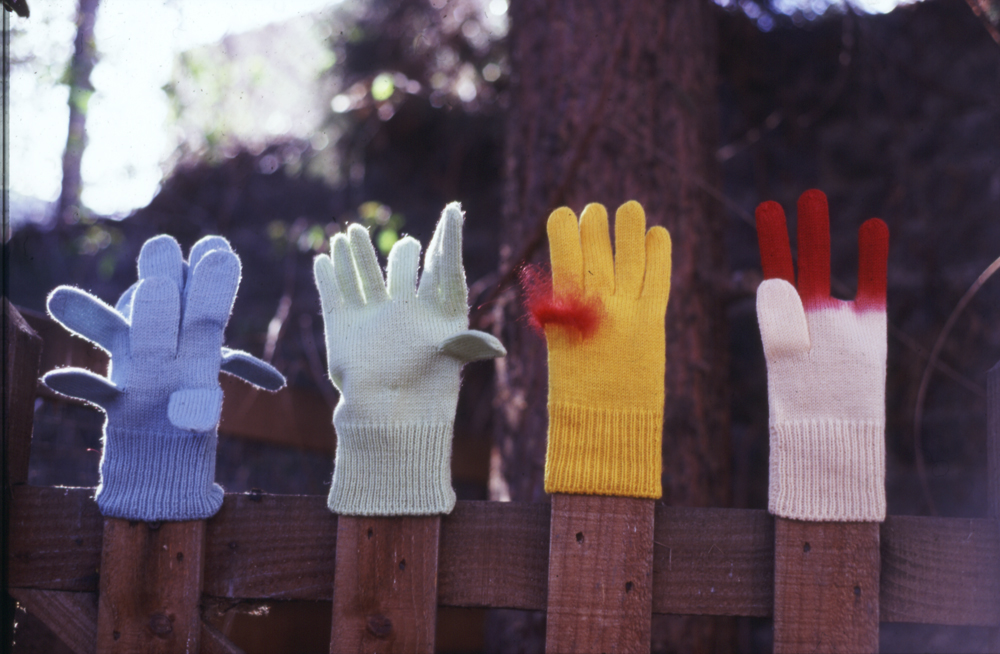 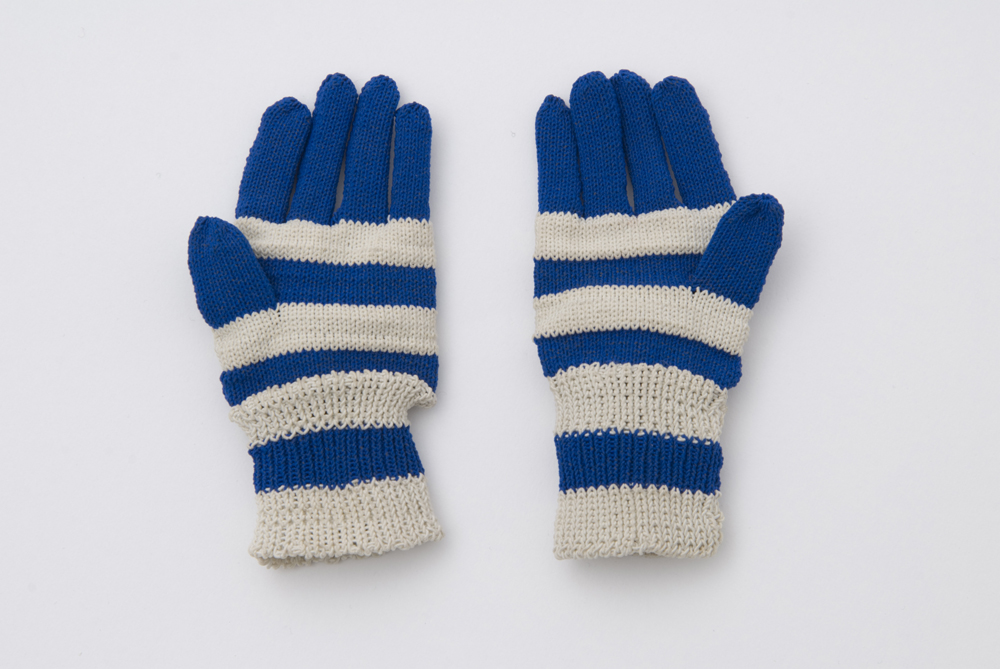 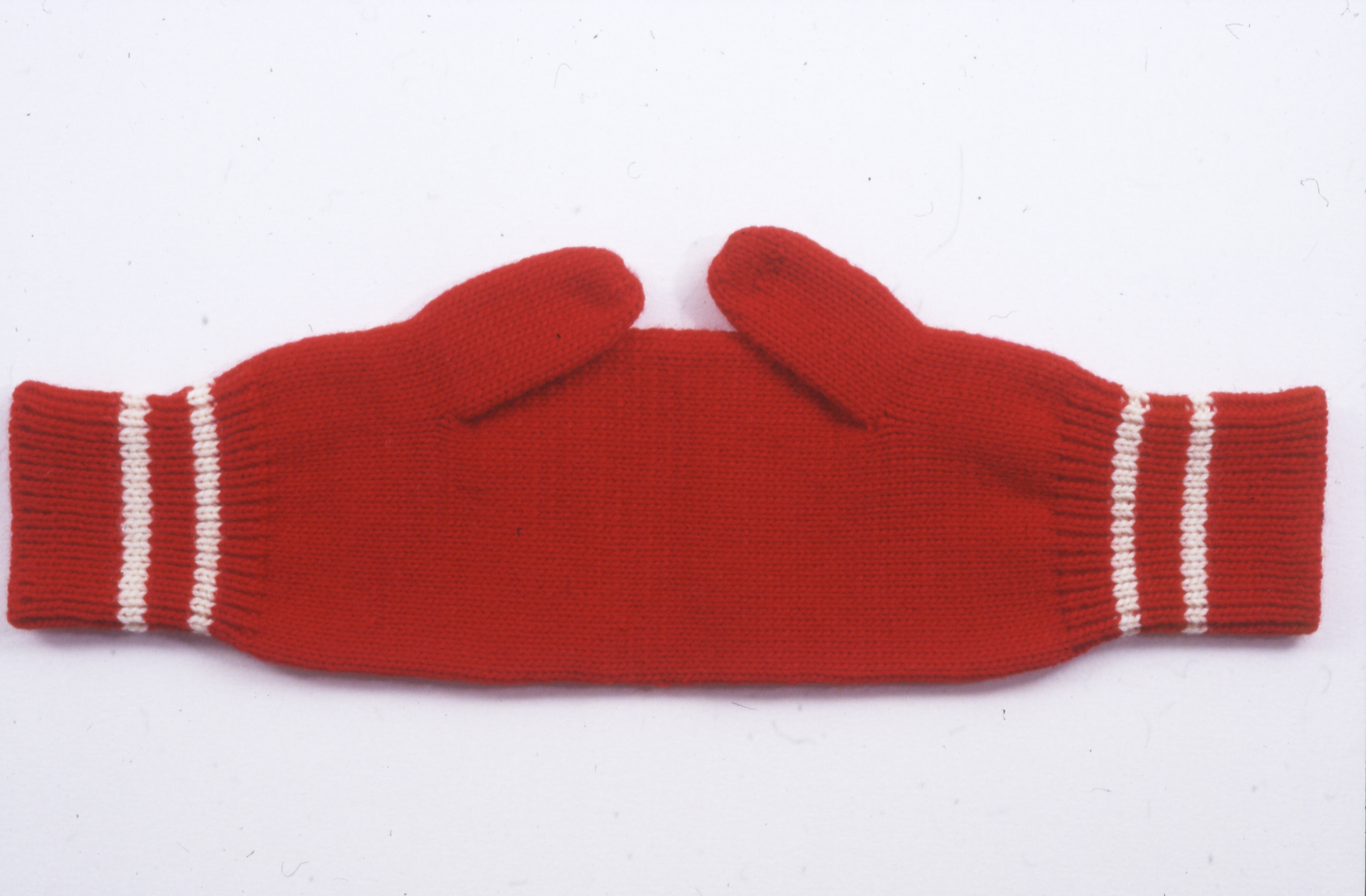 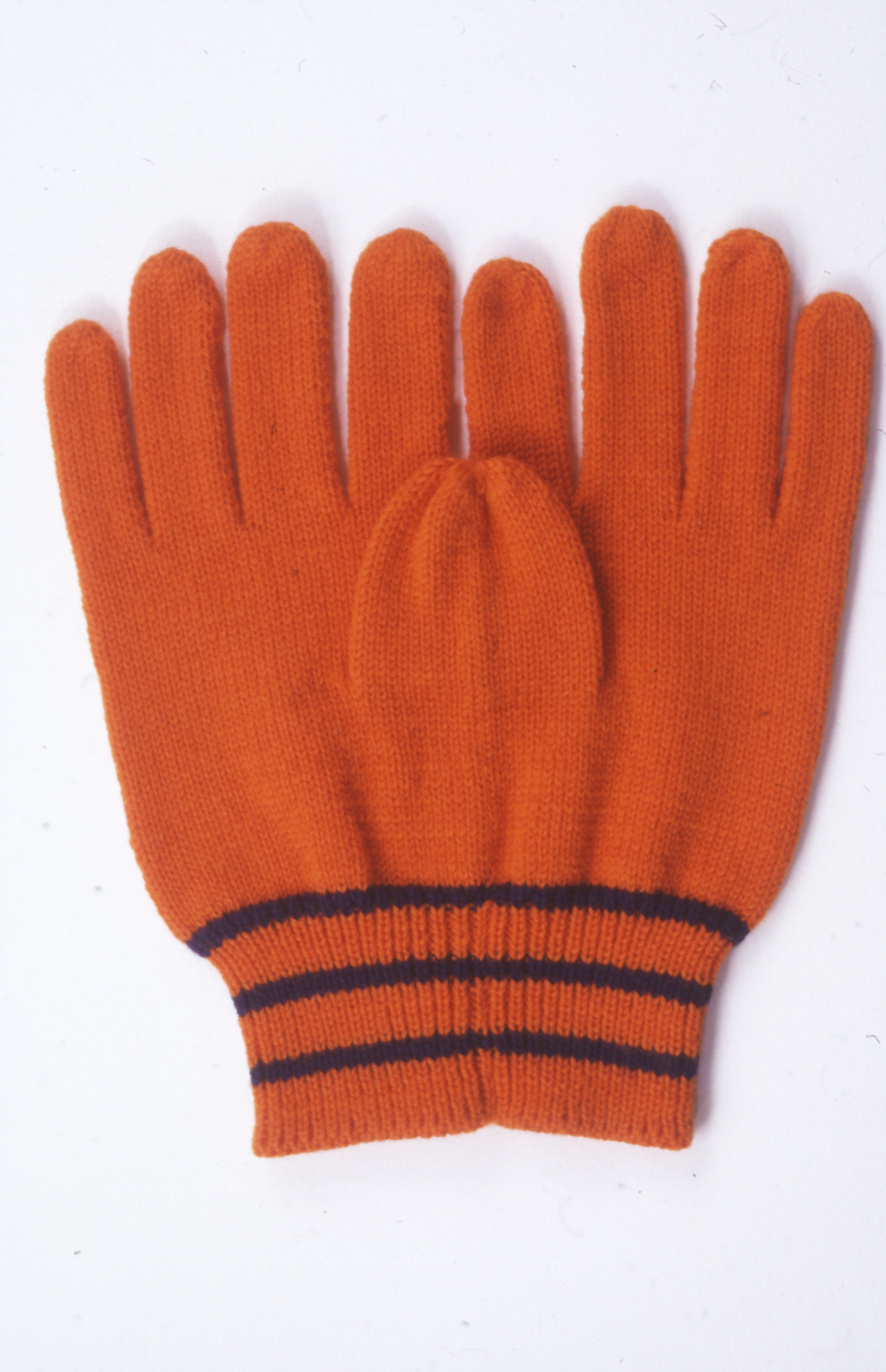 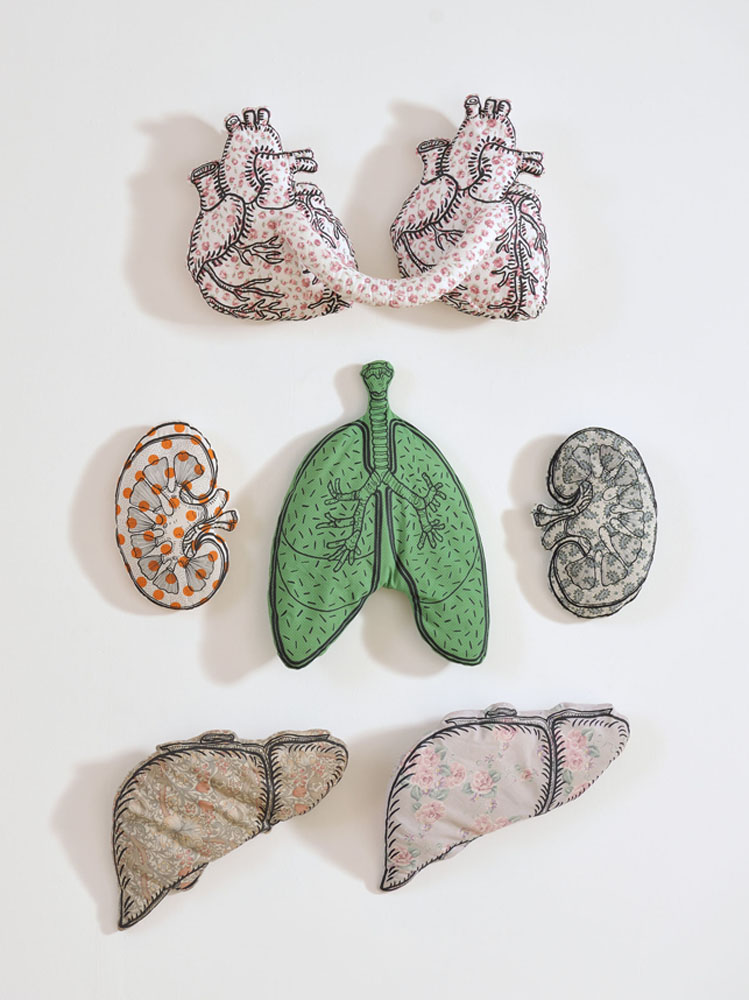 People often ask “What is it?” Shouldn’t we know what our kidneys, let alone our hearts, really look like? These pieces are not intended to educate but entertain and stimulate. “Body Parts” combine Freddie Robins’ interest in word games, medicine and humour eg: turning fabrics such as iron-burnt cotton drill into a visualization of Heartburn.
(Statement taken from the catalogue for Artextiles,  Bury St. Edmunds Art Gallery 1996)